2016 has become a very successful year for us not just because Team ResCube have represented Hungary for the first time at the RoboCup World Championship 2016 between June 28 and July 4 but also we have gained professional experience and received superb prizes and awards.

The Flower Robotics as one of the key sponsors of RoboCup World Championship 2016 selected our robot among all (around 500!) robots of all teams as the best design. This is like a constructor award, and our robot was evaluated by a large committee based on the submitted documentation, on personal interviews and on examination of the real robot. They have emphasized that our key strengths were: approaching problems with creativity, designing a custom, versatile robot from scratch without using any templates. Last but not least, our team’s open and challenge seeking attitude were also important factors for the nomination.

This brand new competition at the RoboCup Rescue Robot League was aiming for robots designed for hazardous and autonomous outdoor missions. The task was to follow a predefined difficult path precisely and as fast as possible. The high precision of the (cm-level) GPS-technique we used coupled with the high speed, the power and the towing capacity of our robot lead us to win this contest with high score. As we had to use the same robot both in the regular indoor and this outdoor mission (only minor modifications were allowed, and anyway all our resources went to this one) we found a nice way to quickly make our robot “outdoor-effective” by simply changing the wheels. 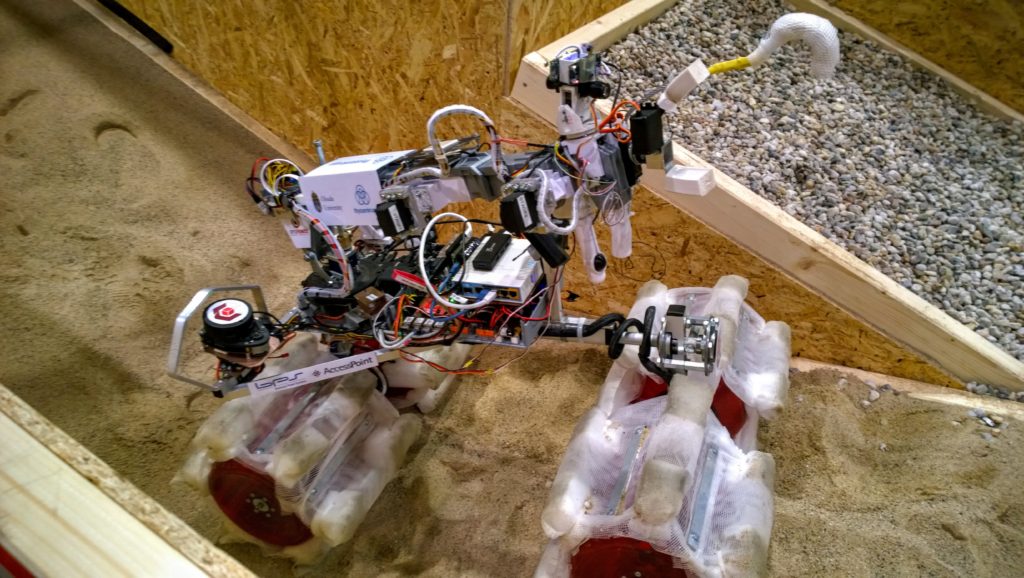 According to the new RoboCup Rescue Robot Leage rules the robots can show their skills in 20 different challenges. Most these challenges are very hard, they push the robots to their limits in order to have a great final deviation in the scores thus finding the best robot and the best approach.

Out of the 20 possible challenges there were 5 mandatory and the teams could choose 10 more up to their will. The scoring system was very difficult (at each challenge the best robot gains 100 points and the rest receives the scaled fraction of the best) so the scores were changing all the time.

There were 19 robots competing from very famous universities around the world and we are very proud for such a fantastic final ranking in this extreme competition. Our prototype-robot was doing its best for over 20 hours while being pushed to its limit and encountered no major issues or malfunctions. This was the benefit of the thorough testing and fore-handed, prudent design.

We were so prepared with tools and spare parts as lots of other teams asked us for some help and we were always able to. The UpRobotics team from Mexico and the BSM RKRS team from the US kindly thanked for our contribution to their results.

Our ranking in the sub-contests:

The main aim of the Rescue Robot League is to inspire the design and production of robotic agents being deployable in disaster scenarios. In order to have a standard and clear methodology to evaluate response robots the competition is thoroughly supervised by the National Institution of Standards and Technology (NIST) from the United States.

The trigger for the Rescue Robot League was the earthquake in Kobe, Japan in 1995 as after such a disaster a huge number of people my get in difficult situations compared to the number of available rescue aid personnel having tough tasks to accomplish and hard decisions to make. By using robotic agents (which in fact may be expendable) that can be deployed in short time, can help getting a clear view on the situation, may raise the chance of survival and finally can intervene at the situation.

At the contest prototype robots of most commonly university and young engineer teams are competing to gain the highest score at a difficult simulated collapsed building. Most these robots have decades of development and significant government/university sponsorship, so they are absolutely not easy opponents. We have to admit that we have seen very special, high-tech robots – but the strong opponents just inspired us to struggle harder.

At the beginning of each challenges all robots shall prove their general skills in a same, short, standard test. To motivate the teams, the score gained in the readiness test becomes the multiplier of the final score of the given challenge. The task of each challenge can be accomplished multiple times for the time frame, so the final score is: readiness test x challenge repetitions. To make the life more difficult, these are not final scores: to encourage teams to risk difficult challenges the overall best robot receives 100 points and the others receive the proportion scaled down. 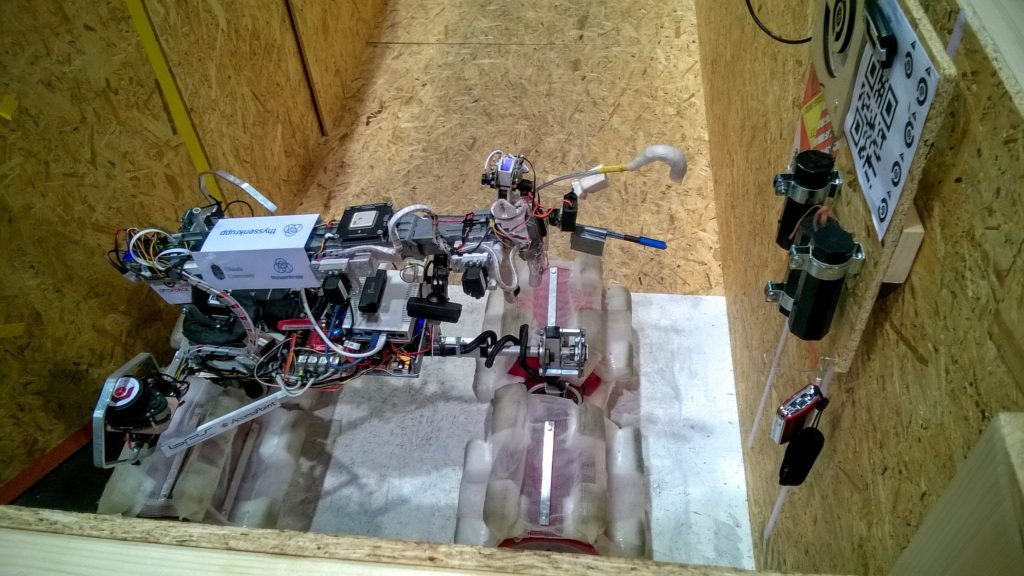 The tasks in the readiness test:

After this, also as part of the readiness test: 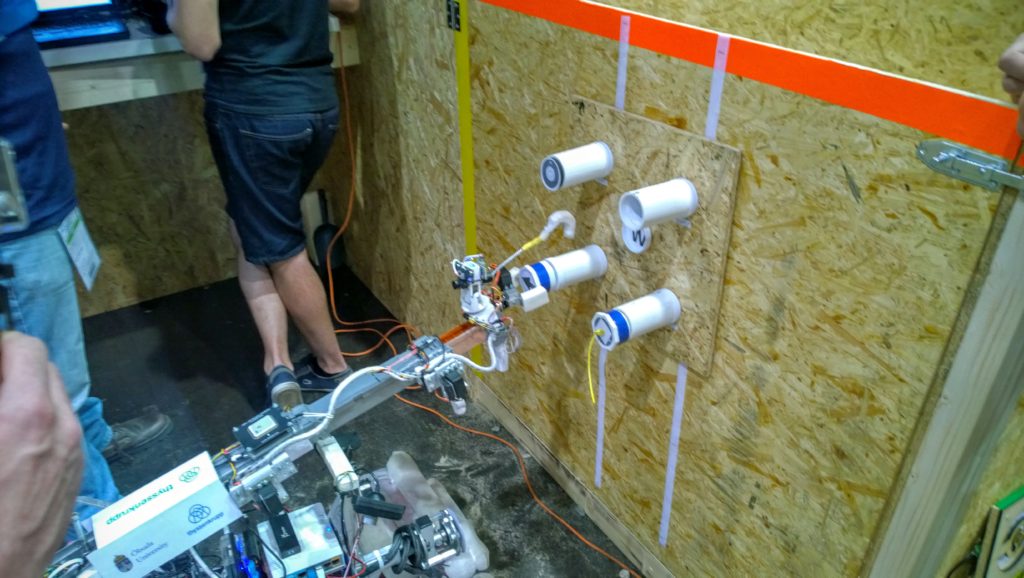 We are proud that with our home-made robot-arm we ware able to accomplish all these tests, and with our sensors and software tools nearly all our (readiness) tests had a result of 10 (maximum) points. These were appreciated by the other teams which were mostly able to get 7-8 points with their significantly more expensive equipment.

Although for the challenges and tests we plan to publish a standalone blog-post, here is a short description of the tasks:

MAN1: A slalom with turn width set to the robot’s diagonal ground contact dimension, challenging a robot’s awareness of interactions across it’s width.
MAN2: Two bars (100 mm width) to cross which are set to the robot’s outer ground contact dimension. The robot’s tracks outer edges will be centered on each rail to limit left/right error similarly for various locomotion designs.
MAN3: A 30 degree inclined OSB surface to follow line in a zig-­zag pattern both forward and reverse.
MAN4: A field of 15 degree ramps with a discontinuity to crossover.
MAN5: A set of movable vertical and diagonal sticks to push through (without breaking the sticks) or avoid. 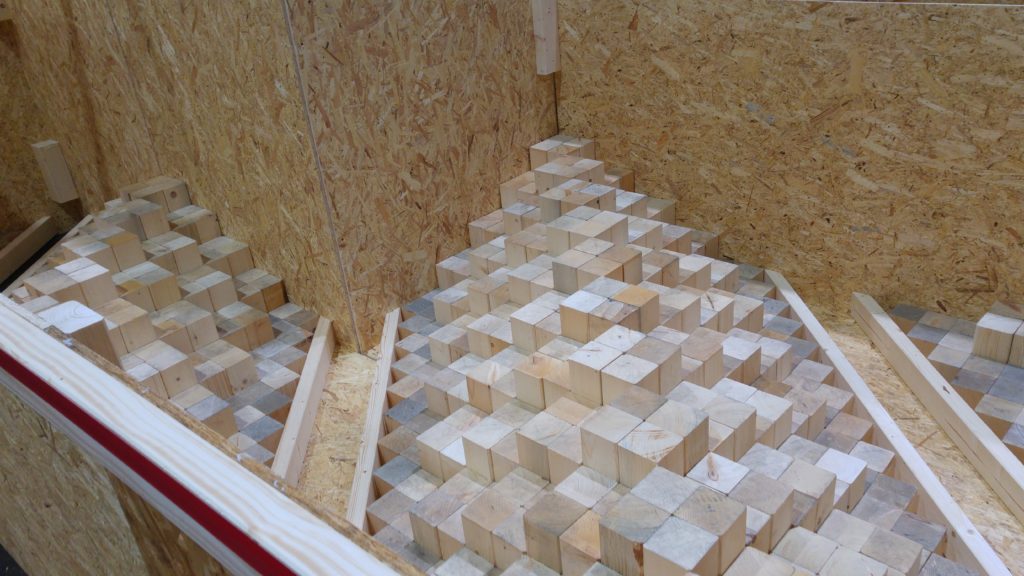 In a collapsed building the robots face extremely hard terrains. 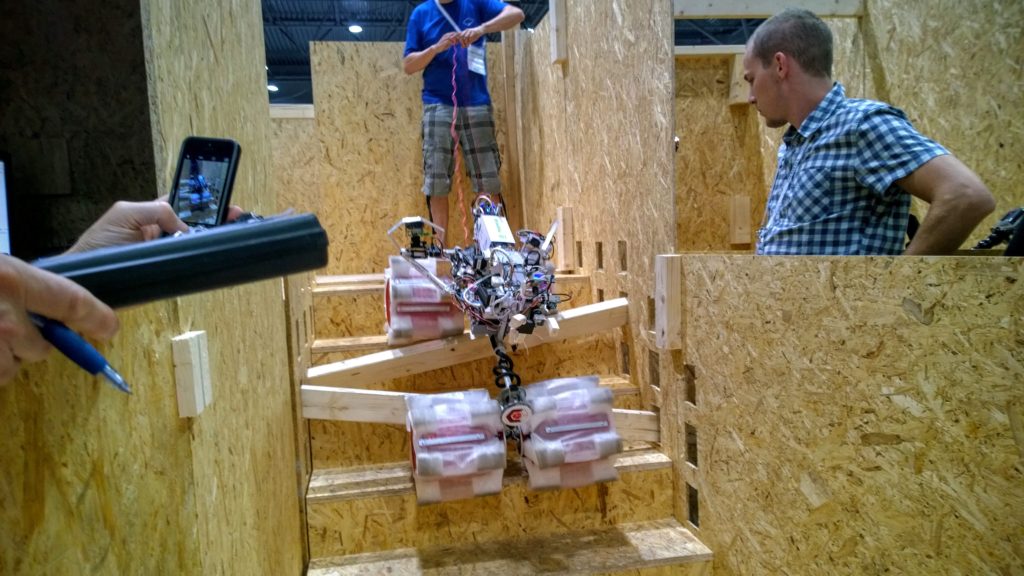 The human body is an extremely fine-tuned universal machine with high levels of degrees-of-freedom. For robots however it is a very difficult task to replicate/replace the dexterity of a human arm.

DEX1: Inspect, Touch, Rotate and/or Extract in total 20 parallel mounted pipes (mounted on 4 boards with 5 pipes on each board). This test is conducted within a terrain with ramps that requires mobility.
DEX2: This is the Pipe Star variant of DEX1, but mounted in an omnidirectional orientation (tasks include Inspect, Touch, Rotate, Extract). This test is conducted on an inclined surface.
DEX3: ​Same as DEX1, but pipes are mounted within a 60 cm diameter cylinder placed horizontally on the ground (tasks include inspect victims inside the cylinder through holes). This test methods is conducted on a flat surface.
DEX4: ​Open and drive through push and pull doors with lever handles. Doors will not​have spring closures during the preliminaries. One door will have springs during the finals. The doors may be accessible from open 240 cm square areas or more confined 120 cm x 240 cm hallways.
DEX5: Shoring​: Build a shoring structure composed of two wooden blocks in each layer of a vertical tower. The blocks are 600 mm (24 in) in length and approximately 1.8 kg (4 lbs) in weight. This test is conducted on on a flat surface 2.4 m x 2.4 m area. 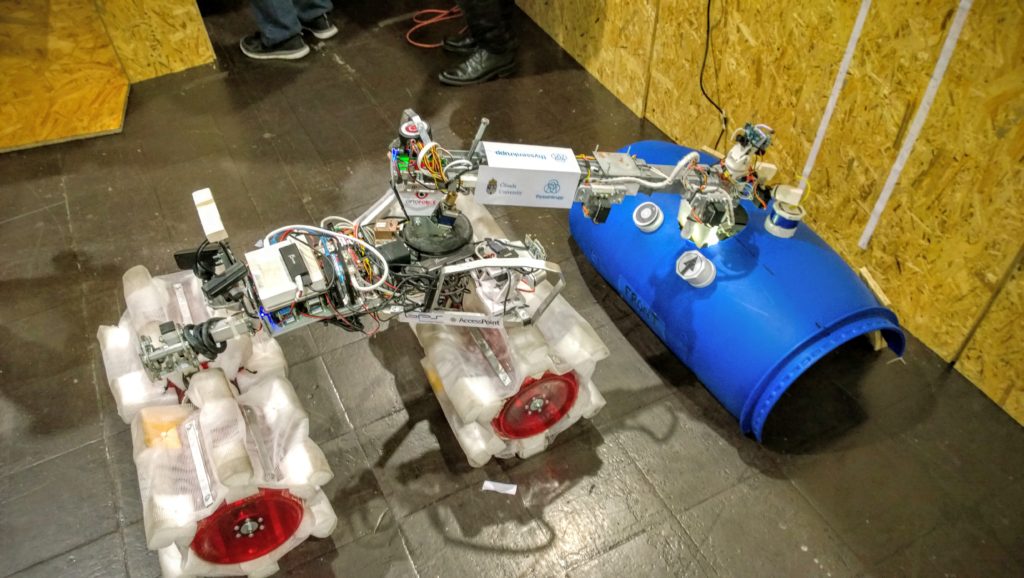 It is one of the important tasks of a rescue robot to provide accurate information on the traversed area to the operating staff. 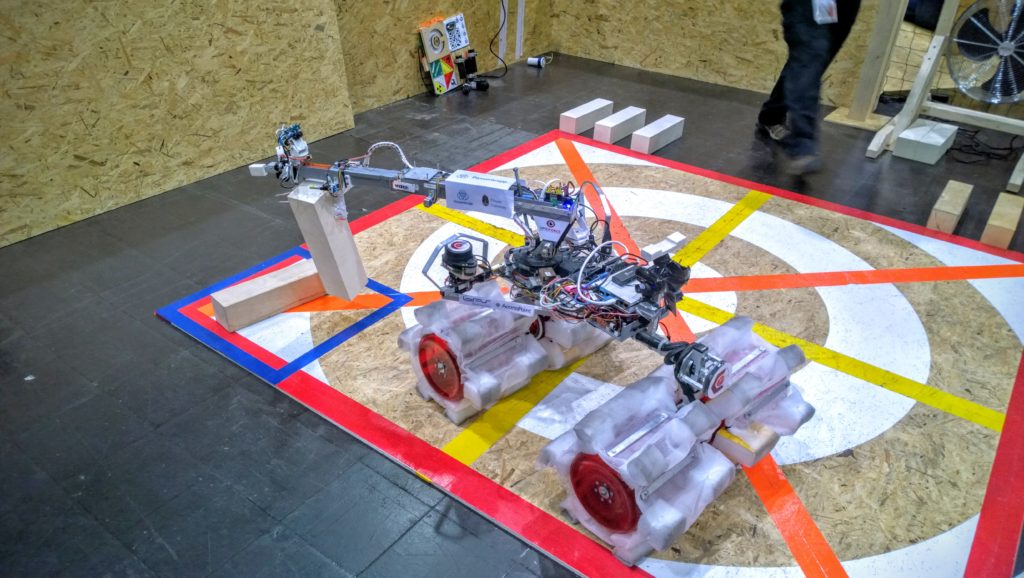 At the Outdoor CarryBot competition the task for the robots was to pull a bicycle trailer (filled with useful resources, tools, even victims) along a fix route back and forth as many times as possible. The route was either marked by a line on the ground (robots navigate using line-following sensors, this was the easier one) or given by GPS-coordinates (the harder one). Also the criteria was to move along the path with no more than 2 meters of error. We have decided to go for the more demanding GPS-waypoints version and were using precision (RTK) GPS technique to achieve centimeter level accuracy. Our massive robot body equipped with a large outdoor wheel made it possible to go along the route several times with high speed resulting in a very good final score. When the competition was over we tested our robot and found that our robot is capable to carry over 100 kgs of payload.

The four day championship with regular competitions in the days and programming/fine-tuning in the nights was pretty much exhausting for the team as well. In exchange we have gained very important and valuable experiences after each competition. In the coming weeks we will try to summarize the lessons learned and will start preparing for the next year’s championship.

In 2017 the RoboCup World Championship will be held in Japan, but before that we have to qualify ourselves at the regional RoboCup German Open contest. Also, based on our results it seems we are going to be invited to a competition in Thailand in the spring, so if all goes well we will compete at three different contests next year. However this requires a very hard work and development from us and also we are still counting on our generous sponsors.

The support of our partners and sponsors plays a key role in all our results and successes so we would like to express our gratitude towards them.

We have arrived back home… September 3rd, 2016Péter Kopiás